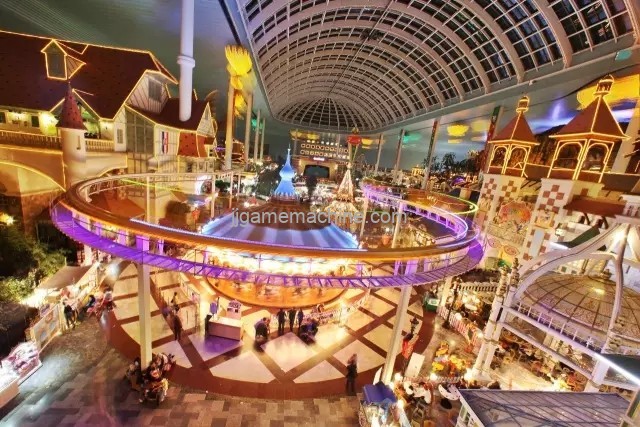 According to the "2014-2018 China Indoor Amusement Park Industry Market Analysis and Investment Forecast Forecast Report", "There are currently more than 500 domestic amusement companies, 80% of which are stereotyped music and naughty castles, and 20% are At present, the popular soft pack amusement park, but few of them can really combine education and entertainment effectively. "

To change this situation, it is necessary to "apply the right medicine", break the stereotyped play mode, and enhance the fun and interaction of indoor amusement parks. In order to enhance the interactive experience of tourists and increase the fun of the performance, the virtual performance system is integrated into the performance of the "Fighting Sea Lion Show" in Shenzhen Happy Coast, which not only controls the development progress of the story, but also activates the atmosphere of the scene with novel performance methods. . The virtual performance system can respond flexibly according to the on-site audience's response, and perform a rich and interesting live talk show with tourists, which can attract the audience's focus during the sea lion's performance interval, so that the minutes, seconds, and seconds of the performance change It's fun. After watching the sea lion ’s performance, visitors can also experience the fun brought by the high-definition interactive screen independently developed by Shuhu Image in the Ocean Dream Hall. Through augmented reality (AR), face recognition, motion capture and other technologies, equipped with cartoon 3D The image allows visitors to have intimate contact with marine life when facing the screen, enhancing the interactive experience.

The use of multimedia technology enhances the fun of indoor amusement parks, but compared with the novelty and humanization of international indoor amusement parks, it still needs constant innovation. Whether it is the creative design of the space in the indoor amusement park or the innovation of the multimedia interactive play format, it is a point that cannot be ignored in breaking the traditional amusement mode. Located in Yanjiao Development Zone, Hebei Province, "Dream East · Future World Aerospace Theme Park" is a large-scale high-tech theme park integrating science education and parent-child fun. The team responsible for the design of the whole case closely follows the design concept of international indoor amusement parks, breaks the traditional thinking, and combines scientific knowledge with interactive amusement, so that it can not only attract customers through advanced interactive entertainment technology, but also enable tourists Learn aerospace science and technology in the music experience. At the same time, the humanized amusement design for the differentiation of the audience makes it the most attractive aerospace-themed family entertainment center in China.

In terms of space design, the theme park is based on people's cognitive laws, from "the origin of the universe" to "little launcher" to "space medical center" and other aerospace experience and entertainment facilities, in order to gradually 1. The form of interactive experience takes tourists gradually into a good place for fun. At the same time, the design team also pays attention to the use of multimedia technology to innovate interactive play forms: the "exploration of the solar system" using forward joint acquisition technology, the "black hole mystery" that simulates the sense of weightlessness, etc., all enhance the novelty experience of tourists in a sci-fi sense .