In fact, the theme parks in the first echelon in China all have a lot of profitability. According to public data, the overall growth rate of theme park visitors is much higher than other countries. Why these theme parks can be profitable, their experience is worth learning from the industry.

As one of the most ambitious projects in history, Shanghai Disney Resort has attracted much attention in the past year. Shanghai Disneyland has received more than 11 million tourists in one year. "This accommodation was an order of magnitude in the past even local theme park in the crowd, you may have accumulated ten years. " .

Disney's most talked about is its strong IP, and the pan-travel entertainment cultural industry chain that it has built is operating effectively. Disney's fiscal year 2016 shows that its main business is composed of four parts: media network (TV), paradise vacation, film and television entertainment (film) and product sales (peripheral products), accounting for 42.58%, 30.51%, and 16.97% of revenue respectively. And 9.93%. Theme parks only serve as a link in the entire industrial chain. 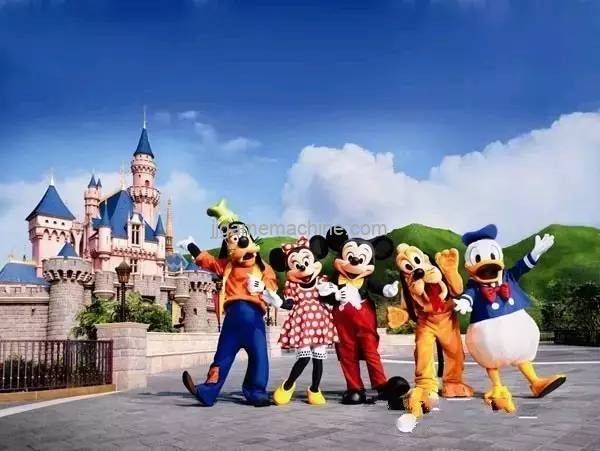 The most intuitive embodiment of Disney's powerful IP is the interactive marketing between Paradise and Movies. The Chinese premiere of the Disney live-action movie "Beauty and the Beast" was held at the Walt Disney Theatre in Disney Town, becoming the first film premiere held at the Shanghai Disney Resort. This not only helped the movie, but also brought a large number of movie fans to Shanghai Disneyland.

Among the leaders in domestic theme parks, IP also plays a role that cannot be ignored. The number of visitors to theme parks increased by 37% year-on-year, and its achievements were also inseparable from the creation of IP.

For decades, it has continuously developed original IP, and has created many popular anime.

IP is the soul of the sustainable development of theme parks. Unlike the theme parks that depend on real estate fortunes, IP has cultural connotations and can go further on the commercial road.

The successful localization experiment is regarded as the main reason for Shanghai Disney ’s gratifying performance this year.

In an interview with the media, the general manager of Shanghai Disney Resort said that all the entertainment scripts and storylines of Shanghai Disney Resort are jointly worked by Chinese artists and Disney experts to create specifically for Chinese tourists and meet the needs of consumers. In this way, the story inspiration and humor that may be lost in the translation process are avoided, and the story can be more grounded.

For theme parks to be out of nothing, local materials must be grounded. Chimelong's ability in this respect is also worthy of recognition.

Chimelong takes advantage of Lingnan ’s unique climate advantages and digs deeper in the field of nature and ecology. Whether it is the wild zoo in Panyu, the ocean kingdom in Zhuhai, or the forest theme park in Qingyuan, all rely on Guangdong ’s own advantages to create an ecological kingdom.

The formation of the Chimelong Grand Circus IP was also re-arranged from the world ’s preferred performances, and it took more than ten years to build, and then was able to host the China International Circus Festival.

However, generally speaking, the ability to tell stories is not only a shortcoming in the tourism industry, but also a weak link in the cultural industry.

The theme park's IP depends on the common development of related industries such as culture, entertainment, animation, etc. Li Mingjian bluntly stated that China's animation industry is still in the stage of slogan slogan, and its own development is weak, it is difficult to extend the industrial chain.

3. Hematopoietic function is a key factor for sustainable development

A bottleneck in ten years is regarded as the law of theme park development. In fact, the cycle of upgrading theme parks cannot be as long as ten years, but two or three years.

The hematopoietic function is a key factor for the sustainable development of the theme park.

Taking Chimelong as an example, basically a new project must be launched every year to create new burst points, so as to attract more tourists and repeat customers. Chimelong Water Park will undergo an upgrade every year when the park is closed.

Disney's approach is to update the project in two or three years and continuously launch new theme areas. Less than five months after the opening, Shanghai Disneyland announced the first expansion project-"Toy Story Park" theme park, and broke ground for the new park. The "Toy Story Park" park is planned to open to tourists in 2018 .

In addition to funding, the technical update iterations cannot be ignored. In the storytelling of Shanghai Disney Resort, technology is everywhere and decisive.

For example, "Pirates of the Caribbean-Battle of the Fallen Treasure", the new driving system was first put into use in Shanghai Disneyland. The pirate ship can complete the rotation, sideways and even retrograde movements, and the scenes can be seen in full view; "Rescue" uses a new interactive aiming system, which is different from any other Disneyland similar projects; "Wandering Fairytale Time" vividly displays the story of "Snow White and the Seven Dwarfs" through the first interactive browsing experience. Computer-generated images, digital media, special effects, projections, and virtual scenes allow tourists to wander through the story world of Snow White.