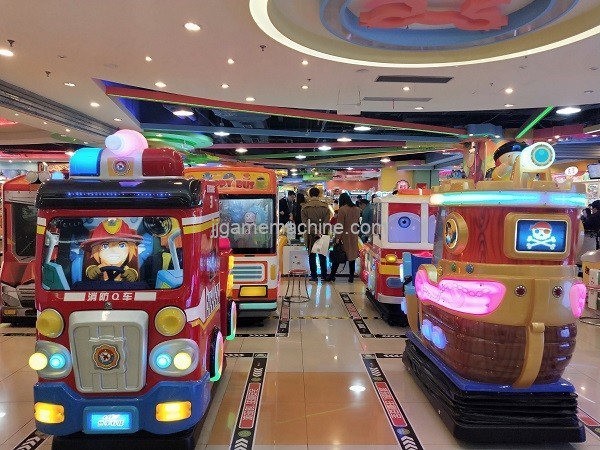 In the playground equipment configuration, the proportion of parent-child machines is a relatively large part. The reason is that due to the rise of the business model of the family amusement center, that is, family parent-child consumption accounts for a major part of the playground revenue. There are two kinds of settings for equipment manufacturers, and there are two setting options for equipment manufacturers at the factory, so the decision of whether these machines will be used for gaming or lottery depends on the profit model of the playground. Then all parent-child machines that can issue lottery tickets must issue lottery tickets. This is often ignored by venue operators. Let us focus on this issue.

1.The importance of parent-child lottery machines

The parent-child lottery machine is the initial stage of the business model of lottery exchange for gifts in the playground, which is very important. That is to say, the lottery atmosphere of a lottery venue has a lot to do with the parent-child lottery machine, especially for the newly opened Venue, because children are the first to play. Parent-child machines, such as water shooting, ball shooting, gophers, bowling, and so on, are not required to be taught by other people. Effective consumption traction guides players to pay attention to those machines with a large number of tickets. In the playground, we mainly do two transformations: conversion of tourist consumption to membership consumption, conversion of shallow players to deep players, so parent-child The importance of the lottery machine is also reflected in the role of consumption traction conversion in the playground.

We recognize the important role of parent-child lottery machines in the venue, and we need to pay attention to the setting of these machines. Not only must tickets be issued, but also the management of the number of tickets issued is very important. Through investigation, we found that there are currently parent-child lottery machines in playgrounds. It is considered unimportant to issue tickets. It is often seen that these machines are in arrears and there is no management, indicating that the venue operators do not pay much attention to the failure of issuing tickets to these machines. Another situation is that the parent-child lottery machines in some venues also issue tickets, but they don't care how much tickets are issued by the machine. We know that there is a very important data in the lottery mode venue operation called the single currency ticketing rate. That is to say, the average ticketing rate of a game coin in the venue, for example, the single currency ticketing rate of a venue is 30 votes / coin, and the parent-child lottery machine is 3 coins per round, then for a parent-child lottery ticket Say, as long as one game does not exceed 90 votes, it is acceptable, and the ticket issuance is very rare in many of our venues. If a child plays 50 or 60 tickets in one game and only 10 tickets in one game, Tickets, player experience is different, the reason is that our venue operators did not consider the importance of this issue, or the machine is too difficult to set up, or the number of tickets is too small, many children can not get The second or third level of the game, so there are very few tickets. In this case, we should appropriately reduce the difficulty of the game or adjust the number of tickets through the magnifying function of the lottery machine, so that children can have a better performance during the game. Sense of gain In order to cultivate an atmosphere Lottery Site.

The relative difficulty of the choice of playground equipment in the parent-child machine is that there are many types of machines. So how should we choose our parent-child lottery machine, we can mainly start from the following aspects. One is the type of gameplay. That is to say, the diversity of machines, such as children's basketball machines, gun machines, bowling balls, water guns, and so on. The second is the quality of the machine. Many venue operators think that children's machines are relatively simple, so it is easy to buy cheap products. In fact, children's machines have far higher quality requirements than some adult machines, because from a game perspective, In other words, children are more destructive to the machine. They will pat, twist, and shake the machine without care, causing many machines to fail frequently. Even before the depreciation period has expired, it is already scrapped. Some also operate. One would say that a good-quality machine is too expensive, and it is wrong to buy it if it is cheap and then buy it. The high failure rate or the old machine will greatly reduce the player's experience. The third is the choice of parent-child lottery machines. As far as possible, the ticketing rate of the machine can be adjusted. At present, there are still some parent-child machines on the market that issue five tickets, the second one has ten, and the third one has fifteen. Or the game show is too complicated, we should consider the sense of children's play, and make the machine a good helper for your venue operation.

The soul of operating in a playground is a gift. In other words, whether the playground is good or not is also a good gift management. In addition to the carefully selected gifts of the gift machine, the gifts redeemed by the lottery are also important. We must pay attention to two problems with the gifts corresponding to the machine. One is the issue of the redemption value, that is, the minimum ticket value in the gift. It must be set appropriately so that the children who come to play do not return empty-handed; the second is the parent-child category. The types of gifts should be moderate, too much is not conducive to the accumulation of lottery tickets and the transition of consumption, and too few will form a rich variety of gifts, so the manipulation of these standards also tests our operators.