don't know how to start investing in children's parks in 2019? We are not afraid, we will come to the tricks~ From the new industry situation and new problems in the new year, help you portray the development blueprint of the children's paradise, want to profit? Not a problem~

At present, the children's theme park market can be described as two days. As far as the "fire" is concerned, the current children's theme park industry is clearly in a stage of rapid growth, and there are even situations in which large and small enterprises are rushing. There are three main reasons for this:

First, with the fourth wave of baby boomers, the population of 0-14 years in China has soared to 260 million. Children's disposable daily consumption accounts for nearly 30% of household income. The scale of China's children's industry consumption in the next five years may be from the current one. The trillion has increased to 3 trillion, so the industry outlook is widely optimistic.

Secondly, at present, the children's theme park industry does not form a monopoly leading enterprise. On the contrary, because the structure of the amusement facilities is high in homogeneity and high in substitutability, the children's theme park enterprises can even process the OEMs without producing their own amusement facilities, even if it is Joining also requires direct procurement of equipment, and the joining fee, equipment installation fee, and personnel training fee are free.

Thirdly, due to the impact of e-commerce, the sales performance of traditional department stores and shopping centers is facing challenges, and children's theme parks with clear purpose and passenger-driven effects, which cannot be replaced by e-commerce, are gradually regarded as mainstream supermarkets and cinemas by mainstream commercial real estate developers. The new main business format after fast fashion. Therefore, the strength developers including Vanke, Poly, Country Garden, Evergrande, Wanda, Shimao and so on are almost all involved in children's theme parks, especially Wanda, and their Baby King Children's Theme Park is supported as a key strategic business.

Most of the parks that have survived are in real loss. The main reason for this phenomenon is that there are few tourists and they can't make ends meet. “Most of the time, there are no more staff members.” Tickets are the most important source of income for children's theme parks, accounting for 80%.

In terms of income, the income of children's theme parks mainly includes single ticket income, membership price and membership card income, souvenir sales income such as socks and plush toys, sales income of water bars and snacks, and some cooperation with early childhood education institutions. Other income. Specifically, the average price of a single ticket for a branded children's theme park on the market is about 150 yuan, and the interval is 60-230 yuan. A membership card, year card or secondary card can generally enjoy a 7-10% discount.

According to the information provided by the organization, most of the children's theme parks in China still focus on ticket sales. In the overall income structure, ticket revenue accounted for 79%, catering and retail revenue accounted for 11%, brand implant income accounted for 5%, and other income was only 5%. Tickets and retail for most venues are still a source of absolute income, and the development of paradise derivatives is lagging behind.

The technical threshold is not high, the products are homogenized, the price competition is fierce, and the infringement phenomenon is widespread.

The game entertainment industry, like other industries in China, suffers from shortcomings in intellectual property protection. Jiang xx said that although the products are registered for copyright, it is difficult for enterprises to defend their rights, and they are basically “passive” rights. Bh entertainment domestic and international market products are strictly differentiated, and products that sell well overseas are definitely not sold in China. Hanxx's new factory will restrict access to general customers, and only brand customers can enter. He said that this move is a last resort, because too many products have been infringed, and their own factories are built to protect their own products.

Even leading companies are extremely helpless in terms of intellectual property protection. Often, new products will not be launched soon, and counterfeit products will appear. In addition to independent research and development, JM's practice is to establish cooperation with domestic universities and colleges and well-known domestic companies, continuously introduce cutting-edge technology products, and integrate resources to launch high-end ideas, so that counterfeiters can imitate the “fur” and “core”.

The market is fragmented, and the annual sales of well-known companies in the industry are only tens of millions.

Quality improvement: In the absence of a small number of children's theme parks, improving quality is a possible way to stand out from the competition. High-quality children's theme parks are not only more attractive to consumers, but also more attractive to shopping centers. Quality improvement in terms of equipment and services not only increases passenger flow, but also enhances their own negotiation with Party A. Competitiveness.

The traditional amusement equipment company has been developing for many years and has formed a number of mature enterprises with scale. However, the overall industry has low barriers and fierce competition. Mature enterprises are also facing the pressure of transformation and upgrading, and there is no investment value.

However, the amusement equipment is more expandable and reproducible. You can focus on some equipment companies with technology content and new technology applications to see if there are innovative products and models to solve the existing pain points. Pay attention to the degree of the company's product technology leading the market, pay attention to the company's ability to quickly open up the market in a short period of time, because there are many industry followers, and once the followers enter, they will soon enter the price war stage.

Selling equipment is not competitive, and selling a device while providing a unique overall technical solution (xx) or operational solution (xx) is a differentiated path. However, if you only sell equipment and technology, and participate in less than the back-end profit, the profit and scale will be very limited.

In general, there are many competitors in this industry and the market is scattered. Even with a certain technological lead, it will soon be copied by competitors. The industry has not formed a copyright or patent protection mechanism. It is difficult to form a company with a large scale and a high market share.

There is a trend to network traditional devices. For example, doll machine, rocking cradles. Integrate traditional amusement equipment with new business models and technologies. The networking of the doll machine can promote the increase of the user's single consumption amount through the operation means. The network of the rocking cradles solves the pain points of offline settlement and equipment maintenance with online payment. But at the same time, the problem is that high profit margins and low thresholds will attract a large number of incomers, how long can the bonus period last?

The operation of the stadium is also an area with low entry barriers and fierce market competition. Every year, a lot of new brands go on. The playground hall has a large demand for the site area, high rents and high initial investment. If the location of the mall is not good and the traffic is not good, the passengers will not close down quickly. The amusement park tube cannot rely entirely on the passenger flow of the shopping mall. On the contrary, for the shopping mall, it is hoped that the good playground will play a role in draining the shopping mall.

For its own operations, it also needs to work hard to improve passenger flow and increase the amount of consumption. The key to drainage is whether it provides a scarce, novel experience. Scarce experiences depend primarily on financial strength, the application of new technologies, planning capabilities, and the ability to quickly update iterations. At the same time as increasing revenue, the better the drainage effect, the higher the bargaining power when negotiating the terms of cooperation such as rent in the follow-up place. Eg Teamlab's model provides a unique visual experience. Tickets are sold crazy.

From the perspective of increasing the amount of consumption and improving the efficiency. The combination of multiple formats, higher efficiency, also drives the industry to the direction of collective consumption of diversified families.

Therefore, in the future, there should be a living space with a larger scale and a more extensive offline park. A small, uncharacteristic paradise will slowly be eliminated.

Industry capital entry is very low. The head enterprises have better cash flow, and they all use their own profits to roll forward.

If capital enters, it must be a rapid and large-scale forecast in the short term, and accelerate the pace and speed of expansion. However, the operation of a playground is related to factors such as time and space that cannot be copied. For example, MELAND can only make a profit if it is opened in Nanshan Wanxiang City. If there is no such project as Nanshan Wanxiang City in a short period of time, even if you take the money, you can't expand to open a new store. After taking a lot of money, YYT found that it was not a good idea to take the money to open the store quickly. On the contrary, because the performance of the new store was not good, the overall profit margin was lowered, but there was pressure to expand the scale. Output the development path of the overall solution.

There are 70 directly-operated stores that can achieve 400 million revenues a year, but may need to do more than 1,000 franchise stores to get the same revenue scale. Can the market accommodate so many homogeneous stores? Is the ability to manage the franchise company available? It is a problem that will be encountered in the future development.

Under such circumstances, what kind of empowerment can the capital enter into the development of the playground? What scale can the company grow to?

From the perspective of the industrial chain, this industry is a trend of upstream to downstream layout. The upstream real estate developer, investment / self-built playground brand (Wanda Baby King as an example, compared to other competitors in the industry have the advantage of venue resources).

Upstream equipment manufacturers , in order to make their equipment sell better, operate the brand to provide franchise services (take Qierer as an example, similar to Ala Xiaoyou shop is to sell milk powder ideas, compared to other companies selling equipment have service attached The advantage of value). The logic of the upstream fund investment in the downstream playground brand is established.

But in general, offline playground operations are not a very good business. There is no room for cost reduction. The increase in income also has ceilings. The more stores you open, the lower the profit margin and the lack of economies of scale. Do direct business to eat profits, do join the loss of revenue. 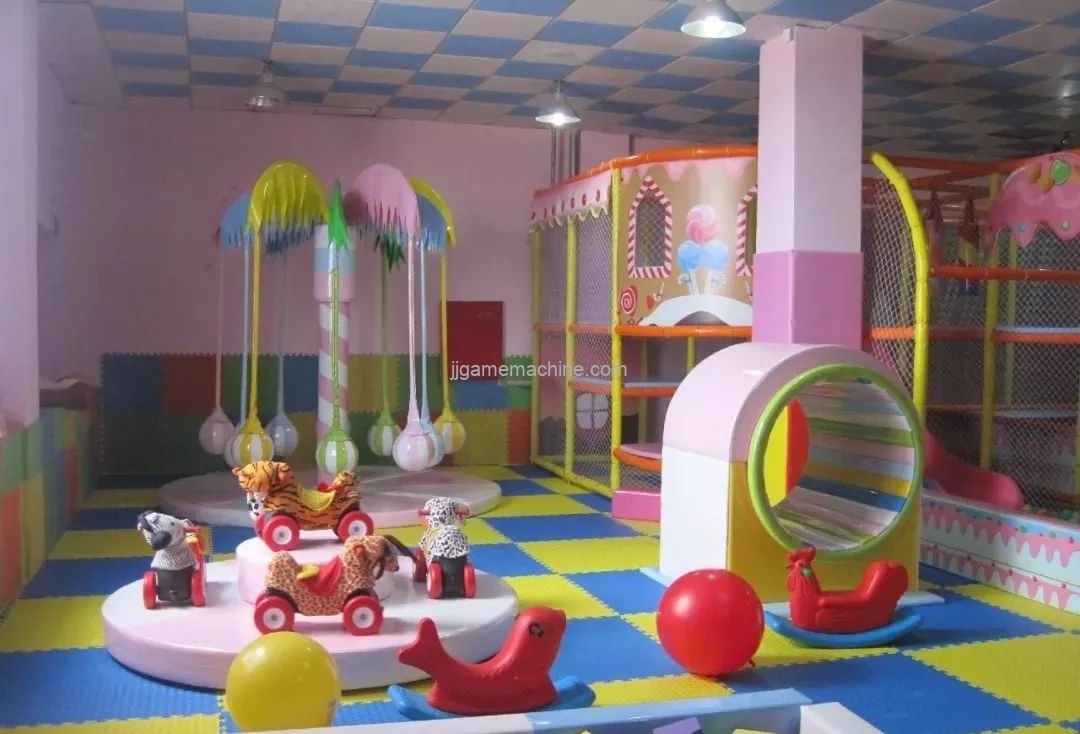 The risk points of the children's play industry are mainly concentrated in the following points:

Upstream equipment vendors are more worthy of betting than offline playgrounds. As long as the equipment is competitive enough, no matter how the offline paradise changes, there will be a place for equipment manufacturers. Therefore, knowing the status quo and grasping the opportunity can "eat and live" in the new year!