China’s first Universal Studios , which cost more than 50 billion yuan, is about to open.

The world's first "Crazy Animal City" is about to fall "Shanghai"

This is simply an explosive news in the theme park.

We have new places to get up,

Excited to want to spin and jump Estimated opening time: first half of 2021

Apart from Disney, Universal Studios is one of the most popular places to visit. Compared to the US, Osaka and Singapore, Universal Studios Beijing is bigger than any of the current ones! With a total area of more than 4 square kilometers , after completion, there will be 7 major theme parks + five major hotels, etc., one-stop unlocking our various gameplay.

The fans no longer have to go to the United States and Osaka, because the popular Harry Potter theme park is about to debut in Universal Studios Beijing.

This includes not only the iconic Harry Potter Hogwarts magic law school and Diagon Alley, Hagrid's pumpkin cabin famous scenes, etc., it will be equipped with the convergence of the world's most advanced technology equipment 4D ride Harry Potter taboo Multiple trips such as the trip and the world's highest double-track roller coaster challenge.

Chinese fans can open this wonderful journey at their doorstep, Dumbledore's office, Gryffindor public rest area, branch hat, etc. Every frame in the movie can be experienced here. I am so excited to think about it~

It will also restore the Jurassic Park in the movie scene in 1:1 . The restaurants and shops are exactly the same as in the movie.

The old iron that loves Transformers must not miss the Transformers 3D virtual roller coaster in the studio to experience the decisive battle of Megatron, Optimus Prime and Hornet.

It also allows you to cross the "Daddy Daddy" in a second, and take photos with the cute and naughty little yellow guys to have fun together...

In addition to these popular theme parks, Beijing Universal Studios also incorporates Chinese culture and brings together many Chinese elements . For example, this includes the exclusive creation of the cartoon "Kung Fu Panda" as a signature facility in Beijing.

In addition, the organizers also considered the long-term factors in Beijing's winter, and will develop more indoor amusement facilities according to specific conditions to meet the winter needs, so that visitors can feel the charm of Beijing Universal Studios regardless of the season. Super intimate~

In addition, what interests us the most is the fun water world . The wonderful water wars, jet boat water skiing performances and the effects of water fireworks explosions. I think it is a wonderful scene in the American blockbuster scene. High!

If you are tired, you can experience 5 large resort hotels and enjoy the ultimate service and facilities.

Can't wait to come to 2021? I feel that it is not enough to stay in it for 1 week! If you want to know more about the progress, you can always go to the official website and wait for the official announcement. 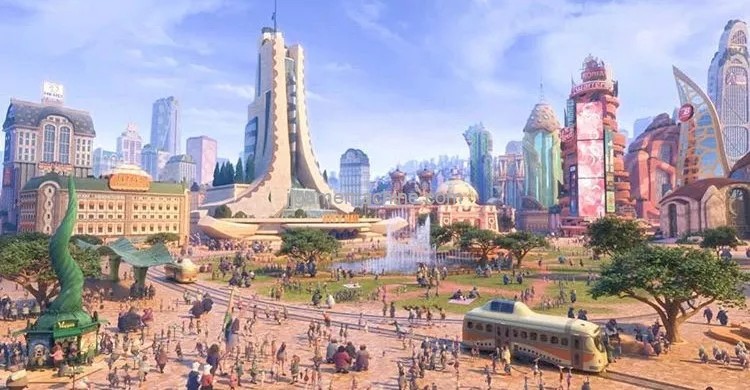 After the completion of the "Crazy Animal City" will become another unique highlight of Shanghai Disneyland, new attractions , entertainment , goods and dining options will provide visitors to Shanghai Disneyland to provide more exciting experience. What do you most expect? Maybe it will happen~

Interestingly, the door on the fence of the construction area currently corresponds to the design in the movie "Crazy Animal City". It is divided into three designs: big, medium and small. The official operation of this wave is very slippery~

Looking forward to being in the mammalian metropolis, and the popular King Judy & Nick on a crazy and exciting adventure ~ I imagine it is fun!

Bring us fantasy and many wonderful "My Neighbor Totoro"...

I want to take a ride on the train in Shanghai and go to the magical world...

The moving castle of Hal has always been full of curiosity and yearning, and fantasy can live in it to feel the innocence and love~

I thought that these beautiful longings can only be fantasized.

However, I don't want to be true!

Because the "Ghibli Theme Park" has been opened,

It is reported that the Ghibli theme park will be built in the Aibobo Memorial Park in Aichi Prefecture. The old house where Xiaomei lived in "My Neighbor Totoro" and the room outside the room were perfectly reproduced according to the scenes in the animation.

It is not only necessary to build the "My Neighbor Totoro Theme Park", "The City of the Sky", "Spirited Away" and "Hal's Moving Castle" are also likely to be built one after another~

In other words, unlike most of the artificially created theme parks, the Ghibli theme park pursues natural harmony and is established without destroying the basic principles of the forest area, because Miyazaki has always been passionate about nature .

The studio of Ghibli Studio also said that the whole park's creativity was designed by the soul creator Hayao Miyazaki, and the mobs were very excited when they thought about it. When they started, they wanted to fly in the first time.

After the palace fans can fly to Tokyo to visit the "park" under Hayao Miyazaki's pen, the mobs have begun to fantasize and enter the Champion with a big hug. Or will you encounter the delicate and self-willed Chihiro? It’s really too much... I’m so excited to welcome that day!

Let us look forward to the grand opening of the three major paradise!

I bring you, you bring money,

Let's go looking for "childhood" to cut down?