Past life of the doll machine

Humans have tried to sell with mechanical equipment a long time ago. The first Coin-op Machine in history has appeared in ancient Greece more than 2,000 years ago!

At that time, the name "Hiro Holy Water Meter" was used to sell "Holy Water" to the masses.

This device was installed in ancient Egyptian temples around 215 BC. Put a coin, the inside of the instrument through the principle of leverage, let go of the valve, out of the "Holy Water." At that time, the ordinary people did not have the ability to study the principle and had the right to be a "sign"!

The wisdom of Heroo can be said to be very powerful.

Unfortunately, the slot machine has experienced a long break.

It was not until the mechanical era that the first coin-operated coin machine "Honor Box" appeared in the modern sense, which was the prototype of the vending machine. In 1700, a British pub set up a coin-operated wooden box to sell snuff. When you insert a coin, the lid will pop open and it feels so fun...

Since then, the vending machine has developed extremely slowly since the end of the 200 years... It was only until the 19th century that it finally ushered in a breakthrough.

In 1822, a British publisher and bookstore owner, Richard Carlisle, invented a vending machine that distributed books. This buddy is unlucky. Because he sells banned books and is often sued by the government, one day, when he opened his brain, he thought of a solution and hid it and sold it! !

He designed a sophisticated device to be placed at the door, and guests only need to put a coin and then turn the dial to the shameful title to get the little yellow book they want. (In fact, people only sell books of radicals~)

However, this is not a fully automatic device, because those books are all manually operated by the buddy's assistant... Yes, it is to hide behind the machine and hand the book to you...

After another 25 years, the invention of the point is coming.

In 1857, after the first stamps were introduced in the UK, an Englishman named Simeon Denham obtained his stamp vending machine patent. Finally! ! ! The first patented vending machine was born in history.

In the late 1860s, the Austrians invented the first postcard and soon became very popular. At this time, there is a smart person named Percival Everitt who not only knows how to invent but also knows how to do business. He watched the postcard boom and started to sell the automatic slot machine for selling postcards in London.

Later, he re-engineered these machines and successfully extended the commodity field to chocolate, chewing gum, cigarettes, matches, perfumes, etc., making vending machines available in almost all station hotels and stores in the UK!

Is it five pounds or eight pounds?

The moment to witness the miracle...

What's more interesting is that this move has opened up another situation. Many machines with similar functions came into being. Measuring the grip, measuring the vital capacity, and measuring the gravity of a punch... Various coin machines appeared in the bar. Among the pubs, it has become a new entertainment mode!

And, you can make more and more money than vending machines! !

Driven by the industrial revolution, the era of auto-sale is finally coming to an end! With the popularity of electric lights and civilian electricity in the late 19th century, coin-operated machines have developed rapidly throughout the world.

In 1888, the United States ushered in the first vending machine.

Thomas Adams set up the first Tutti-Frutti chewing gum vending machine on the New York subway platform. In 1907, this machine was almost as familiar as we are now.

On the other hand, with the continuous development of recording technology, in November 1889, the first coin-operated jukebox in the United States was installed by the Pacific Gramophone Company and began to be placed in various bars and train stations. Customers can listen to coins as long as they can. Go to songs or short recordings.

The era of coin-operated entertainment opened by Americans

In addition to the coin-operated machine, how can I play it? That is to have fun.

The slot machine not only grows fast in the United States, but also clearly opens up new directions for entertainment! Coin-up Amusement also lays the foundation for the two most important entertainment industries of the future - records and movies!

The origin of the English name of the arcade!

In 1890, Ohio Records began to focus on coin-operated phonographs, managed and maintained by dedicated service personnel, providing customers with a better listening environment.

At the beginning of the 20th century, coin-operated entertainment became a huge business. The playground “Penny Arcade”, named after the smallest coin unit in the United States, became the main market for mass entertainment and the origin of the later coin-operated ride “Arcade”.

Several major manufacturers in the United States immediately launched a pinball (ballistic machine) that was popular for half a century!

Hey, this little paw, is not the relative of the doll machine?

Inspired by the excavator shovel, grab some small things by controlling the steering wheel and the shovel down position.

The mini digging shovel is packed into a glass cabinet filled with candy and becomes a candy vending machine for children to operate.

This type of game console, also known as the "Claw Crane", was often placed in restaurants such as Pizza Hut, and gradually spread to venues such as stadiums and the NFL (American Football League). The team used to promote team souvenirs.

Americans have not given up! They continue to develop more diversified models: sports games, such as simulated football, basketball, baseball, and simulated gun battles... to ensure that the coin-operated entertainment machine is on the healthy and active Sunshine Avenue~~~ ~~

The coin-operated entertainment machine was a rare and booming industry in the United States during the Great Depression. In 1930, the first centralized entertainment slot machine casino, Sportland, was born!

It is now the arcade game hall!

The coin-operated entertainment established by the Japanese

After the war, Americans' demand for entertainment broke out, and the huge profits and excess orders of coin-operated entertainment machines plunged the market order into chaos.

Mutual plagiarism has become a trend, and the development of new models has been completely exhausted since the 1950s. The development base of entertainment-selling machines has already crossed the ocean - to Japan!

In the latter half of the 1950s, in Japan in the post-war recovery period, entertainment facilities such as automatic small rocking horses have appeared on the roof of department stores for entertainment by ordinary people.

Game companies such as Taito, Namco, and SEGA were also established in this period and developed rapidly.

In the 1960s, Jaguar Claw, produced in Italy, was the first prize-winning game machine to be introduced into Japan. However, because of the circulation cost and high failure rate of the machine, it was quickly replaced by local products.

In the same year, SEGA also launched a legendary model of skill Diga (スキルディガ). During this period of time, the scenery products in the machine (Japanese prizes) are all kinds of snacks.

The Japanese game industry has always pursued the use of the doctrine. SEGA has carefully studied the competitor's machine, and borrowed from the advantages, but also fully improved the shortcomings!

After the launch of SEGA's Skill Diga, popularity quickly overwhelmed the authentic TAITO. In 1986, the UFO CATCHER launched reached its peak and won the Japanese arcade coin-operated rate for several consecutive years.

In the design of the machine, SEGA strives for the value of the sky! The grip arm has been redesigned to increase the success rate. I hope to protect the glass heart of the players~~~ Please don't give up! !

As the success rate is increased and the cost is increased a lot, SEGA only has a low price and good quality when purchasing the products. The beautiful doll with a cost of only 8-10 yen has become the main product.

SEGA also decided to follow the trend of the trend, constantly changing the new to attract players, so the doll machine was born!

For more than 30 years, the Japanese have not neglected these machines, and have continued to refresh their history with richer gameplay and better scenery. Only then have the wonderful world of doll machines, which carry the second-dimensional culture and continue to the world.

Up to now, the first floor of every arcade shop in Japan has been used to set up the prize-winning machine. As time has passed, Japan has also created a unique cultural circle of prize-winning games. Among them, the doll machine is the most representative phenomenon level symbol.

Then I will play various tricks by the Americans.

In the end, the coin-operated entertainment machine  ushered in its prosperity in Japan...

This is her complete past and present!

The world defines the game

The game also defines the world

The most precious of them is not the game console.

But our passion and curiosity about the game.

May you be willful in the adult world

Finally, let’s take a look at the wonderful patent behind the doll machine.

The United States Patent Office published a patent in 1994 called a vacuum suction doll machine (left), patent number US5513772. This is the originator of such a doll machine. This type of doll machine uses a rotating fan in the motor to generate suction for picking up a toy with a mesh hole to prevent the item from being sucked into the hole. The prize captured by the suction is distributed to the player by a dispenser. After a series of technical improvements, the current US8070167 patent style is shown on the right, and the look is more beautiful. But unfortunately this doll has no real thing, only live in the literature... 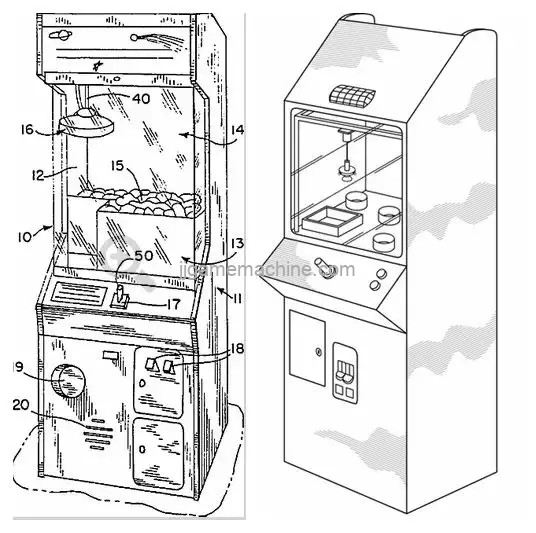 Putting doll machines are very common in the market. The picture below shows that the Taiwan Intellectual Property Office received a patent (TWM395501U) called a game console with push-push method in 2010. This shape is exactly the same as that of the game consoles that everyone usually sees. Compared to the clip-on doll machine that pays attention to the character, this is really the strength, the pot friends who have not played can hurry to try it.