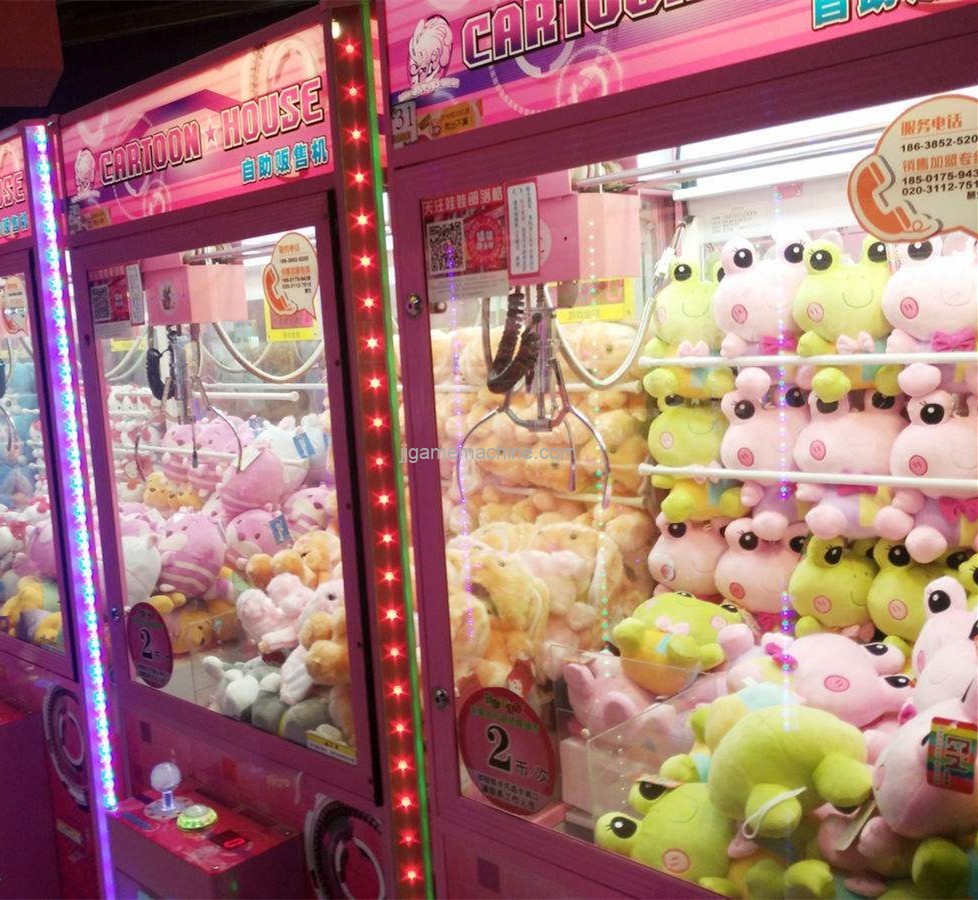 The world is a huge doll machine, I just want you, across the glass.

1. How does the doll machine make people want to stop step by step?

2. What are the three stages of the doll machine in China?

3. Can you "lie down and earn money" when you do a doll machine?

With more than 300 yuan to buy a plush toy worth 50-60 yuan, palms, in many people's eyes may be a problem with the brain.

But if you spend 300 yuan on the doll machine for an afternoon and only catch a doll, people will only say that your skills are not good or bad luck, and will not be questioned.

Doll machine, the spirit of contemporary people "opium." From the old to the child, few people can resist the yearning for a successful capture of a doll. As a "one-billion-dollar" business in the eyes of many people, how can the doll machine rise in China and how to develop it? Can a doll machine really "lie down and make money"?

The birth of the doll machine, dating back to the United States in the early 20th century, began with the emergence of an entertainment-type "excavator" based on a steam excavator, allowing children to obtain candy through self-operated shovel or claw-type devices.

Gradually, the candy excavator evolved into a prize-winning machine. Game participants began to expand from children to adults, and the grabs were also increased from the beginning of the candy to small daily necessities and some high-value items.

With the application of high-value goods in the lottery machine, its speculative attributes became stronger and stronger, and merchants began to introduce the lottery machine into the casino and placed coins and chips in it. This practice quickly became popular, and it was not until 1951 that such devices were banned by law and disappeared in the market.

But this is not the end. In the 1950s, the machine was introduced to Japan, and it was initially popularized in the form of “crane games” (similar to gold miners). At that time, the content department of the goods (collectibles) included Office supplies and food.

In the 1960s and 1970s, due to the shrinking of the arcade market, Japanese game makers began to look for a transformation path and focused their attention on the winning body. Around 1980, on the eve of the Japanese bubble economy, a lot of stuffed toys were unsalable. People began to put these plush toys into the prize-winning machine. The dolls began to replace snacks and became the most common scenery.

In 1985, the Japanese game manufacturer Sega developed a two-prong gripper with button control. The machine named "UFO Catcher" is easy to operate, cheap, and very eye-catching. Since then, the doll machine has been in Japan and has swept across Asia.

The first stop for the doll machine to enter China was Taiwan. In the 1990s, some Taiwanese manufacturers who mastered the production technology of doll machines from Japan, under the policy of reform and opening up, built factories in Panyu, Guangdong, driven by the manufacturing industry, and the doll machine also entered. Mainland market.

According to the interface news report, as of the end of 2018, Panyu's doll machine factory conservatively estimated that there are 2,000, the doll machine production has accounted for more than 90% of the world.

The rise of the doll machine in mainland China has an inseparable relationship with Panyu. Due to the low rent and labor costs, Panyu is also a major base for the production of game machines at home and abroad. According to public data, the peak production period of Panyu game amusement machines can account for 20% of the global market.

Before the doll machine, Panyu’s center of gravity was a fishing machine. After being suspected of gambling, in 2012, the Ministry of Public Security was reorganized in a concentrated operation of “shovel gambling and positive ethos”. The doll machine with lighter speculative attributes will take this opportunity to become a key industry in Panyu after the transition and spread rapidly across the country.

According to statistics from IDG, as of the end of 2017, the total number of doll machines in the 661 core cities nationwide was 1.5-2 million units, with an annual market size of over 60 billion yuan.

Three steps, the Chinese growth history of the doll machine

So far, the development of the doll machine in China has experienced several periods.

In the 1.0 period, that is, before 2015, the doll machine mainly appeared in the comprehensive entertainment venues such as the video game city, and mainly used the coin-operated claw machine to grab the plush toys.

At this time, the shape of the doll machine is relatively simple. Since the machine is mainly imported and assembled from Taiwan, the cost is high, and the dependence on manual maintenance is strong. It mainly exists as a device for attracting female users in the video game city, and belongs to the basic popularization stage.

In the 2.0 period, from 2015 to 2017, the doll machine market entered a stage of rapid development, with three nodes:

The first is the comprehensive lifting of the ban on game console sales (the "Opinions on the Special Governance of Electronic Game Business Places"). The turning point of the policy has brought new opportunities for manufacturers. Since 2015, Panyu's doll machine manufacturing industry has been transformed from assembly to R&D. The manufacturers who master the technology have concentrated production and formed a mature doll machine industry chain.

The emergence of mobile payment has made the doll machine get rid of the coin exchange process. For the consumer, the mobile phone sweeps and recharges online, and also reduces the pressure of manual maintenance.

The third is the emergence of remote control management functions. With the application of mobile payment, the management control of the doll machine faces higher requirements, remote fault reporting, inventory (doll quantity) management and other functions are on the line, and the doll machine begins to shift from the artificial era to the intelligent age. .

At this time, the doll machine can be separated from the electronic amusement city in the case of lower cost and better experience, and enter more scenes such as shopping malls, movie theaters, restaurants, etc., and enter the high speed with the trend of returning to the offline and fragmented entertainment. expansion.

In the 3.0 era, after 2017, the doll machine ushered in a comprehensive upgrade of channels, technology and content.

In addition, the emergence of small programs makes the operation of catching dolls on the mobile side more convenient, and brings a window of opportunity for marketing, and the profit model of the doll machine has also become diversified.

Say goodbye to the era of lying, the doll machine needs to make some changes

The growth bottleneck in the doll machine market comes from many aspects. The first is the diversification of the offline entertainment and leisure market.

In the past 30 years since entering China, the form of the doll machine has not changed much, but new entertainment projects have been emerging. In the video game city, the emergence of music games has captured the attention of female users, and fragmented entertainment and leisure projects have emerged in an endless stream. Mini KTV, lucky boxes and so on are also constantly capturing the limited offline entertainment time of users.

The blow from the online is not to be underestimated. With the high popularity of mobile phones, more and more applications are taking users' attention, and people spend more and more time online. According to QuestMobile's June 2018 data, the average mobile Internet usage per person per day in China is as high as 289.7 minutes (about 5 hours).

Mobile games, live broadcasts, short videos, information platforms, social software... More and more content occupies the user's life. At the same time, the 2017 fire caught the line and the line was cold. According to the public data, the retention of the doll machine lasted 6%, and the 3-day retention rate was only 1%-2%. For comparison, the average mobile game stayed 30%-35%, and the third day retained 20%-25%.

The doll machine seems to have encountered a growth problem. How to deal with the increasingly strong borderless competition with the "old age" in its 30s?

Such a store may give us the answer: As an offline chain store specializing in doll machines, the first store opened in Sanlitun, Beijing, opened on January 1, 2018, with an average of 6,000 passengers per day. Up to 30,000 times, according to the pricing of 4-6 yuan, the daily turnover is about 150,000.

The reason behind this string of numbers is also very simple, because all the dolls sold in this store are popular IP derivatives that can't be bought outside. Under the IP-based style of play, the result of obtaining a doll is much higher than that of catching a doll.

This so-called entertainment does not separate the family. In the case that the consumer users of the doll machine pay more attention to the "face value", it is not a good idea to let the IP fans pay for the "collects" by catching the entertainment of the doll.

In the same way, the effectiveness of this method also reminds us that the doll machine has basically bid farewell to the era of wild growth and “living to make money”. Whether it is form, content or technology, the doll machine industry has reached the eve of change.