Is the amusement park a joy? Not always. Excitement, dreams, horror, brains wide open... Come and let go of these theme parks that don’t take the usual path!

Speaking of nuclear power amusement parks, what is happening in people's minds is probably the Ferris wheel that was abandoned in Chernobyl and just stood in a ghost town. However, Wunderland Kalkar, located on the German-Dutch border, is a large amusement park that was built but transformed from a nuclear power plant that has never been put into use. Various reactors and factory buildings have been newly decorated and become a special tour project.

The theme park covers an area of 550,000 square meters, which is equivalent to the size of 80 football fields. The park is full of flowers and pools, and there is a 450-room hotel, many restaurants and bars. The rides include a bowling alley, mini golf course, beach volleyball court, outdoor racing center and more than 40 rides.

The landmark of the amusement park is the cooling tower of the former nuclear power plant. The outer wall is designed to be a climbing wall for children aged 9-16. If you are not afraid of height, you can climb the 130-foot-tall cooling tower to see the rural scenery on the German border. . Its inner layer has been transformed into a children's paradise for children under the age of 12 to play. Sand pits, slides, marine balls, and indoor cruise ships are all available. In addition, there is a vertical swing rotation swing inside, the swing slowly rises, 360 degree rotation swing, bold friends please open your eyes, you will see the town under the eyes, especially pocket.

Ferrari World, the Ferrari World Park in Abu Dhabi, is a unique multi-sensory theme park and the largest indoor theme park in the world. The entire Ferrari World was built for $40 billion and is located under a large triangular red roof in the Yas Island Development Zone, adjacent to the circuit of Formula One Abu Dhabi.

Abu Dhabi Ferrari Theme Park, the entire building project covers an area of 200,000 square meters, overlooking the sky, like an alien flying saucer, the red ceiling is printed with a large Ferrari LOGO. It is almost a reproduction of the entire Ferrari headquarters, Maranello. In the stadium, in addition to the Ferrari sports cars, racing cars. Even F1 garages, wind tunnel labs, driving simulators, and racing assembly shops have “replicas”. Recreational facilities are all available, the most shocking of which is the world's fastest roller coaster with a top speed of 240 km/h. 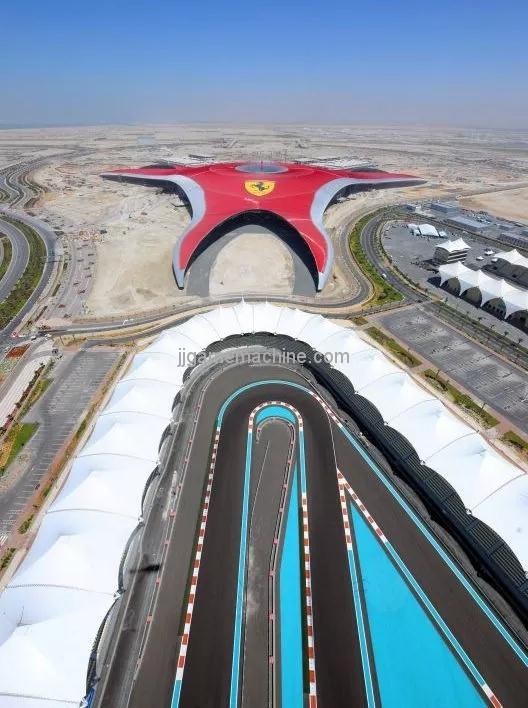 The entire park was filled with red, with the roar of the engine. The park has the largest Ferrari racing exhibition in the world, except for Maranello. Visitors can watch many classic and contemporary Ferrari racing series. In addition, visitors can also visit Ferrari's pre-park parking lot and experience the tools used in the racing and training process. Training is available when logistics maintenance personnel change tires for a real F1 car.

Sunlight Edo Village is different from resorts and playgrounds. It is a theme park with the backdrop of the Edo period. It reproduces the streetscape of the Edo period, the houses of merchants and warriors, the ninja performances of historical dramas and scenes, and the maze of poetry and poetry of the secret organs, allowing visitors to experience the real life of the Edo period. .

Edo Village is divided into seven parts: traditional theater performances, experience areas, entertainment venues, monuments, various museums, cultural learning centers and restaurants. Every day at noon, there will be a squad show on the streets of Edo Edo Village, representing the most beautiful women selected during the Edo period, and showing their charm to visitors. The entire village is the stage, and all the staff will perform for you anywhere, creating the most authentic atmosphere.

Located in the heart of Copenhagen, Denmark, Tivoli Gardens is Copenhagen's famous amusement park and leisure park and one of the oldest amusement parks in the world. The park was built in 1843 and has a history of more than 150 years. This ancient amusement park opened in 1843 has a romantic name - Tivoli, which is written by I lov(e) it, and its Chinese translation "Fun Volley" is also full of innocence.

The park is small and the rides are old. It is the originator of the fairy tale amusement park. The source of inspiration for Walt Disney is here. The flowers and buildings in the park are unique – the Chinese towers and the stage are the prototypes of the lights of the Andersen’s Nightingale, the image of the Chinese emperor and the palace. Half an hour before the closing of the night is the climax of the fun: with the 1.15 million bulbs, the park has become a world of wonderland, fireworks in the air, lasers in the illusion, and tens of lights reflected in the lake. To turn romantic fairy tales into reality.

There are not many tourists in the park, and there is basically no need for queues for entertainment facilities. There are 28 rides and two open spaces with daily drama and music performances. There were only a few recreational facilities in the early stages, and the wooden roller coaster built in 1914 was the oldest roller coaster in the world, maintaining a record of more than 1.2 million visitors per year.

There are also theatres, concert halls and many restaurants, bars, and candy shops. In the gift shop, you can buy cute Danish cookies, cavalry dolls and other special gifts.