The layout of the animation game machine, the environment of the video game city, and the attitude and quality of the service personnel constitute the basic factors for the operation of the game hall. However, with the intensification of the competitive pressure in the video game arcade market and the occasional increase of some uncertain factors affecting operations, it is not enough for our operating staff to do just these three aspects. So how does Gaming City increase its popularity under the increasing market competitiveness? Let's take a look together.

In order to achieve a good and long-term view of development in the harsh competitive environment, in addition to greatly improving our own competitiveness, we also need the promotion of an excellent team to maintain. It can effectively accelerate the process of brands and products entering the market, and is recognized and accepted by consumers. When consumers do not have enough understanding and positive response to the new brands and products entering the market, through some necessary promotion measures, they can quickly become familiar with consumers in a short period of time. Such as: let consumers try / test new products to arouse consumers' interest and understanding of the brand's products. Persuade first-time consumers / first-time users to come again to buy or consume, and increase the frequency to establish their purchasing / consumption habits. And the clear introduction and notification of the characteristics of the new product will increase consumer interest in the product, thereby increasing sales.

Generally, a good video game city is indispensable for a good promotion. When competitors launch large-scale promotional activities, if they do not adopt tit-for-tat promotional strategies and measures in a timely manner, they will often lose their existing market share and original customer group. Therefore, promotion is a powerful weapon for market competition to defend and counter competitors. In order to maintain its market share, promotion is often used as a means of strong confrontation. This aspect includes (advertisement promotion, network promotion, email promotion, etc.). 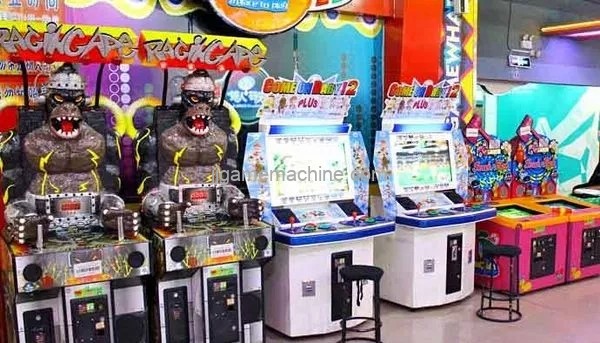 2. Promotion activities must be closely integrated with actual operation methods. Because in the video game arcade industry, the quick return of funds and the rapid turnover of funds are very important for later development. Therefore, when conducting promotional activities, we also need to consider the issue of short-term investment and fund reversion. Only careful consideration can avoid unnecessary things.

How can I plan a successful promotion?

That's right, it is to build momentum. Through the promotion of the lively atmosphere scene, use people's support for the event to attract more popularity.

There must be a goal to build momentum, and the right or wrong choice of the goal is also a key. Of course, some video game cities will also invite some water fish to be the goal, creating an atmosphere conducive to themselves. In this way, not only can it help create a message that is conducive to the game hall, but it can also attract more customers because of herd mentality. It can maximize the conversion of temporary consumers into long-term customers. Development is an important step.

Third, the herd curiosity of consumers

Sometimes, when I walk on the road, I see that there are many people around me, and I always have a kind of psychology that wants to go up and understand the situation. In fact, who has this psychology? It is a curiosity ghost, and The most important step in the promotion of our gaming city is to arouse the curiosity of consumers. Do n’t miss the so-called past. If it can arouse the curiosity of consumers and let them watch, then this promotion has basically been considered a success. It will definitely make other people curious, which will arouse their interest in the event, and ultimately achieve the purpose of our event promotion.

In fact, building momentum is also a simple application of "the curiosity of people" in actual work: through a series of building strategies, attract enough customers to watch, strongly stimulate the consumer's consumption concept, and achieve them through their participation and watching effects Consumption occurs in a short period of time. In addition, this kind of psychology is exactly what consumers cannot detect. And the purpose of the promotion activities led them to generate consumption and it was achieved. But how can we attract customer curiosity? This requires a successful team to think, because it varies from person to person, so I won't go into details here.

How to set interest points?

If it is said that the promotion is to attract customers and arouse customer consensus. Then we set the consumer interest point to retain customers, so that customers are interested in our game consoles. And how do we define this point of interest?

How can we set interest points without losing money?

Do you know what is the point of interest? In fact, the so-called point of interest is the additional value that customers can get from enjoying a game; this is the point of interest of the customer, and the point of interest of our video game city is: in the case of the customer ’s purchase of prizes, etc. The consumption limit we set, and this limit can make customers feel that the money spent is not wrong, but worth it, and the interests of our video game city animation game machine merchants are also protected in such a win-win situation. The point of interest setting is based on the level of consumption in the local area. For example, in places with low income, they all like activities such as "spitting blood for large clearance", "free games to play", "big price reductions" and so on, and areas with high income What they want is not the price, what they want is quality, a good environment plus a quality game machine, so they will consume it. It depends on your area! The final stage is how to implement this promotion.

This requires a perfect solution, and this solution needs to consider the following points:

1. Consumption level in the area where the video game city is located;

2. Time setting, because today's society is basically office workers. Try not to conflict with their working hours;

4. Investment of funds, manpower and material resources, how can we use limited resources to create maximum benefits?

5. Various unexpected problems that need to be paid attention to during the event, and be prepared for unexpected events (such as cold field);

6. The event is mainly aimed at the crowd, how to promote it to different crowds;

7. What kind of publicity image is needed?

8. The theme and slogan of the event;

A perfect promotion plan In addition to the above-mentioned points that need to be considered, the local promotion of Video Game City, knowing ourselves and knowing each other is a magic weapon for victory. Therefore, the venue manager must not only be well-versed in his own game platform, but also familiar with the situation of local players and peers, so as to be targeted and effective publicity and promotion.

Before conducting the local promotion of the video game city, it is necessary to do a good job of market research.

The first is understanding of the player. Operators can combine information such as gender, occupation, age distribution, consumption level, entertainment habits, income, and education level of local online players to analyze which players will develop into paying players, which players will be attracted by their platforms, and which players Potential players can be absorbed through later development, as well as player age distribution and other information, to facilitate targeted promotion in the later stages.

The second is the grasp of local peer information. Local video game city venue managers have a first-mover advantage. As a latecomer, if they want to stay on top, they must grasp all-round information of local peers, including local peers' operating characteristics, operating models, and promotion forms. Characteristics, strengths and avoiding weaknesses, integration of appropriate promotion plans based on local conditions.

Nowadays, the Internet is developing rapidly, and there are various channels for people to access various types of information. How to use the Internet channels to quickly promote and attract attention depends on how operators carry out overwhelming publicity.

(1) Advertising on local portals and posting interactions in local forums;

(2) Cooperate with self-media, such as public numbers with high audience attention, to promote greater promotions and attract players to play on the spot;

(3) Put up posters in places with high frequency of players going in and out, such as Internet cafes, computers, shopping malls, etc., to increase the exposure of the game;